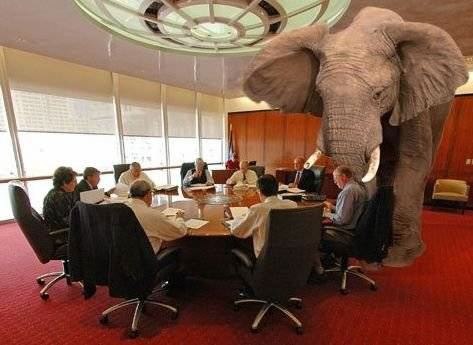 A Guest Blog by Robert Latham

In expressing support last week for increasing the state gasoline tax, Republican Sen. Jeff Piccola provided a delicious dollop of congruity: a member of the pachyderm party blew the whistle on the elephant in the room.

Since 1997, when the state gas tax was last increased, many of our elected leaders have been ignoring the elephant.  Our transportation infrastructure has slowly crumbled to its current deplorable state under the double-whammy of inflation and declining revenues.

At a legislative forum hosted by the Harrisburg Regional Chamber, Piccola said raising the gas tax and motor vehicle fees were the only ways to solve the state’s transportation funding dilemma.  He noted that the revenue raised by such fees go directly into the Motor License Fund, where they are required to be used exclusively for highways.

Some elected leaders extol the virtues of improved efficiency and public-private partnerships, suggesting that they are the panacea for addressing the transportation funding issue.  That Piccola’s conservative credentials are on par with theirs, and yet he still sees the elephant, is noteworthy.

The fact is, the $3.5 billion annual funding gap, which everyone seems to agree is accurate, is a lot more money than we could ever wring out of government by eliminating waste or reordering priorities.

And the fact is, public-private partnerships, while certainly a worthy addition to the toolbox, will have very limited application in Pennsylvania, and almost no application in repairing the existing highway system.

The public is becoming increasingly frustrated with the state of our roads and bridges, and our multimodal transportation system overall.  They want safer travel and less congestion, and we can’t come close to providing those things with the resources available today.

Moreover, an adequately funded transportation program would provide another bonus that will make everyone happy:  the creation of more than 50,000 jobs in Pennsylvania, mostly in sectors other than highway construction.

Those who make a living building and taking care of one of the most essential of public assets welcome and applaud Senator Piccola’s willingness to support a comprehensive solution to the highway funding dilemma.  We invite his fellow legislators to follow suit.

Robert Latham is executive vice president of Associated Pennsylvania Constructors, a trade association of more than 400 members, including contractors, consulting engineers, material suppliers, manufacturers and others with an interest in Pennsylvania’s road and bridge construction industry.