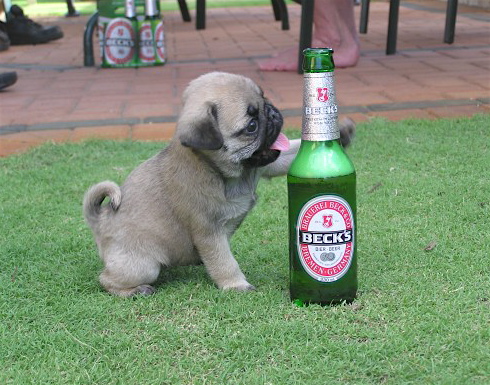 President Barack Obama this week held his first ever Twitter town hall meeting, where he took sub-140 character questions from around the nation.  The best question, by far, came from @VegasDenn, who asked the President:  “Have you seen my car keys?  I can’t find them anywhere.”

If you were planning on going to New York City, getting a good load on and buying a Schnauzer, you can forget about it.  The city's pet stores have banned so-called “drunk puppy buying” and we’re not even sure why people insist on getting puppies drunk in the first place.  Seems needlessly cruel.  Puppies are enough to handle when they are sober.

With the state budget and related rigmarole in the rearview mirror, the General Assembly turns its weary eyes to the fall session, and a big plate of hot issues to haggle over.  At last glance, we have liquor privatization, school vouchers, unemployment compensation reform, natural gas severance taxes (or impact fees) and a comprehensive transportation funding plan all slated for discussion when the House and Senate return.  When all that is wrapped up in the month or so left of Session, the General Assembly will then win the war in Afghanistan and provide some much-needed power to the Phillies lineup.

The news on the fiscal front, which was unrelentingly bleak for as long as we’ve been writing these memos, is finally showing signs of life.  Months of better-than-expected revenue collections resulted in the state ending the fiscal year with a tidy $785 million surplus.  But remember, don’t call it a surplus.   So, should this trend continue and the 2011-2012 fiscal year ends with a few billion in the bank, where do we believe that non-surplus will go?  If you said “business tax cuts”, go get yourself some ice cream, you smart little devil, you.

A full one-third of school districts across the state are in the process of raising property taxes, we found out this week, something that decidedly ain’t gonna happen next year, friends and neighbors.  That is because the newly-configured Act 1 will force the lion’s share of property tax increases to go in front of the voters.  Which is kinda like being a heretic and showing up in front of Torquemada. It won’t be pretty.

Fear not, however, as we do a nice little rundown on the new normal in education spending right here on the Triadvocate.  Essentially, the time has ended for politicians to run for elections to school boards.  Instead, districts are gonna need a few more salespeople.  “How do we give you THIS MUCH value at our school with ONLY a 5% property tax hike??  Volume, volume, volume!”

As we opined last week, welfare advocates are ginning up the rhetoric against the new welfare code changes inked by Governor Corbett.  The law gives the Department of Public Welfare wide-ranging authority to unilaterally alter benefits in order to achieve the $400 million in savings that the General Assembly has demanded.  No word yet on what Plan B is if the DPW fails to find that rather large amount of “waste, fraud and abuse.”  Maybe it is good that we have that non-surplus sitting around.

As Harrisburg city leaders beat themselves about the head and shoulders over how to rescue the city from financial ruin, we find that, like most third class cities in the state, the Cap City could use a bit of help from all the folks who currently pay no property taxes.  Tax-exempt properties have been contributing next-to-nothing to Harrisburg, and the Act 47 team says that needs to change (we’re lookin’ at you, state government.)  Of course, since the city has no power to do anything more than ask politely for payments in lieu of taxes (PILOTs), we’re not betting our Mickey Mantle rookie card on it.

The state’s Liquor Control Board announced this week that it was a banner year in the booze business (again, no drunken puppy buying) as profits returned to the state were just shy of a half-billion dollars.  Total sales also topped $2 billion, which should start as a nice benchmark number for the folks who want to privatize the system.  And those efforts will formally kick off in 3…2…1…

Boom!  The House Majority Leader has finally put pen to paper and circulated a co-sponsorship memo to his colleagues for his bill that will privatize state liquor sales.  Proponents of privatization are relieved to see that the choo-choo is finally leaving the station.  Opponents are busy dismantling the tracks a few miles up ahead.

Among the other items we could see cropping up this fall is a favorite of the Corbett Administration’s Education Secretary; tying student performance to teacher evaluations.  This issue has always been somewhat of a sticky wicket, because while it seems to make eminent sense in some cases, it also can be a pretty sketchy proposition to tie someone’s entire career to the performance of a bunch of kids who may not have had breakfast that morning, don’t know where their parents are, or spent the previous evening in a cramped foster home.  So, we hope all parties proceed with caution on this one.

Faced with stubbornly high unemployment numbers and crumbling, underfunded infrastructure, Congress this week unveiled a plan to “do more with less” by cutting $16 billion from the transportation budget.  The bill as currently drafted is sitting in the Committee on Shortsighted, Counterintuitive Thinking.  If there is a silver lining, and at this point you’d pretty much have to be a Disney character to see it, it is that at least our state leaders know that the feds will not be coming to the rescue.

In a related development, Ohio Governor John Kasich has floated the idea of leasing the Ohio Turnpike for up-front cash to fix his state’s roads and bridges.  Kasich believes his turnpike could fetch $3.5 billion or so, based upon the length of the lease.  Seems we’ve heard of this plan somewhere before.  If Kasich gets the go-ahead, we believe that Pennsylvania should immediately jump in and try to win the lease, thereby controlling the major access point into Ohio.  Think of the havoc we could cause in the Buckeye State.

Lawmakers will finally be on the same footing with the governor when it comes to budget numbers and revenue estimates, as the long-awaited Independent Fiscal Office is about to become a reality. The office will allow everyone to work from the same numbers, which could speed the process up.  Previously, only the governor knew what the real revenue numbers were, and that office often played the “I got your nose” game with lawmakers right up until (and sometimes past) June 30thin order to extract more of what the governor wanted.

We are!  Penn State!  And dead broke!  We learned this week that the venerable Pennsylvania State University has the highest tuition of any public university in the entire mother-lovin’ country.  This, of course, is not the type of award one would put up on the mantle in the offices of Old Main.  For critics, this news is proof positive that PSU is terrible at managing its finances.  For PSU administrators, it is proof that PSU’s historically low state support puts it at a disadvantage (see the $68 million cut from this year alone.)  Either way…fight on State!

Gas drilling companies are coming together in western Pennsylvania to help fund a new job training curriculum through Junior Achievement.  The Careers in Energy program will help train folks for the lucrative jobs in the drilling industry that are on the horizon (or so we’ve been told about a thousand times.)  This, dear friends in the gas drilling industry, is the type of public relations that you are looking for.  A little more of this, perhaps a little less of “we just blew up your pickup truck.”

A proposal to allow Sunday hunting is meandering its way through the woods of the General Assembly right now.  In a state with over a million sportsmen, you’d think that this proposal would be a slam dunk.  You’d be wrong, though, as historically, farmers have opposed this plan (there are a lot of them, too) since Sunday is really the only day they can rest, and they really don’t like hearing gunshots all morning.  This is why farmers tend not to live in inner cities as well.  Religious groups have also historically opposed Sunday hunting, fearing that the morning services will be a tad less-attended.

Senator Bob Casey, Jr. had a banner week, as he learned that a powerful state lawmaker will not be running against him.  Then, he checked his account balance and found $3 million sitting there, waiting for next November.  Come strong or don’t come at all, says Bob.

And finally this week, a bit of good news, as we learned that the iconic fountain at Point State Park in Pittsburgh is on the mend and will soon be back to welcome visitors as they come through the Fort Pitt Tunnels.  In Pittsburgh, you don’t really enter the city from the west.  It is more like the city leaps up and punches you in the jaw as you emerge from the tunnels.

That is all from the epicenter of state government this week.  We are dangerously close to reaching 600 likes on Facebook, so please do your part and help us out! And make sure you follow us on Twitter for all your morning headlines; we get lonely if you aren’t around.  And be sure to check out Roy's latest foray into the wide world of social media at www.roywells.com!

It is summer in the city (Back of our necks?  Dirty and gritty!), so we’ll see you next Friday!  Until then, from all of us at Triad, have a great weekend!