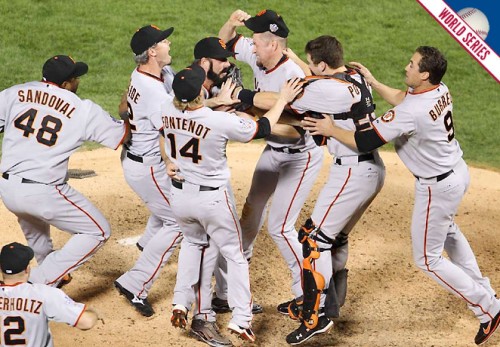 Our guest blogger, Mr. Fabulous, is back with another edition of the Anonymous Gambler, where he turns his attention away from the ponies (thank goodness) and focuses on which MLB teams could shock us all in October.

Well, July is here, people, and I think most of you realize what that means: Mr. Fabulous has almost (ALMOST) sobered up from celebrating the Dallas Mavericks' unlikely beat-down of the nefarious Miami Heat to claim the NBA title. Boom.

The key word mentioned above is UNLIKELY. That best describes the recent champions of the four major sports.

Who had the offensively challenged San Francisco Giants winning the World Series last fall? Not this kid.

And the Green Bay Packers barely snuck into the playoffs, then beat Philadelphia, Atlanta and Chicago on the road before taking out the Steelers and Tubby Ben Roethlisberger in the Super Bowl.

What else? You've got the Mavs, and also the Bearded Boston Bruins, winners of three GAME SEVENS this spring, as the new Stanley Cup champions. Right now, somewhere on the West Shore, Adam Gardner is smiling. He's mostly drinking Jameson's, but he's smiling as he does it.

So that brings me to my latest handicapping venture: Mr. Fabulous' Guide To The Unlikely Teams Most Capable Of Beating The Philadelphia Phillies Or The New York Yankees Or The Boston Red Sox.

I have to admit it: I'm sick of hearing about all three teams. It's getting annoying. You can only watch so many 2-1 Phillies wins, so many Roy Halladay 95-minute complete games and so many Mark Texeira upper-deck home runs. The Red Sox?  No thank you.

I hope they all lose. But someone has to beat them.

Who has the best chance to become this year's Giants? Well, not the 2011 Giants. When Buster Posey was lost for the season, the Giants were cooked.

If Mr. Fabulous were a betting man (and I am and I'm still cranked off about Nehro in the Belmont) I'd be throwing down some loot on these three teams: Atlanta, Milwaukee and Tampa Bay.

The Braves' pitching staff, bullpen included, is better than the Phillies' staff. You heard me.

I'm not crazy about Derek Lowe, but the quartet of Tim Hudson, Tommy Hanson, Jair Jurrjens and star-in-the-making Brandon Beachy can all bring it. They also have a pair of minor-league studs in Julio Teheran and Mike Minor as possible trade chips for a bat. And if Atlanta has the lead after seven innings, good lucking getting to the 1-2 relief punch of Jonny Venters and Craig Kimbrel.

Atlanta is a legit wild-card threat. That staff shuts down anyone. The Braves need someone on offense to help catcher Brian McCann carry the load.

Milwaukee has a killer 3-4 combo of Ryan Braun and Prince Fielder but little else in the batting order. Still, that could be enough to win a weak National League Central, provided Zack Greinke gets his head out of his…well, gets his head right and becomes the staff ace. Yovani Gallardo and Shaun Marcum fill out the rest of a very good starting staff. The Brewers have a shot.

And don't forget about those Rays. They have to beat out either the Yanks or the Red Sox to get to the post-season but the rest of the American League is weak and Tampa features three excellent starting pitchers in David Price, James Shields and Jeremy Hellickson.

A name to remember for Tampa in the second half is young outfielder Desmond Jennings, an elite prospect that the Rays will bring up to help jump-start an offense that, at the moment, largely consists of Evan Longoria and a bunch of schlubs.

You heard me -- ATLANTA, MILWAUKEE and TAMPA BAY. One of these teams is going to make a long post-season run this fall.  I'm Mr. Fabulous … and I ain't no schlub.