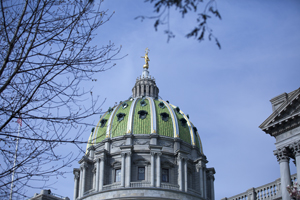 On the agenda today for the House Labor and Industry Committee was proposed amendments to HB 1539 or the Keystone Works I Program Act. This program provides new on-the-job training for Pennsylvanians in their first 26 weeks of unemployment to be placed in a business that will train them with a strong possibility of hiring them at the completion of their training. The unpaid training is to span 12 weeks while the worker still collects unemployment benefits. A similar program exists in Georgia, a model which came up frequently in today’s meeting.

Of the 15 amendments proposed, five passed without much fuss. First was the “Gut and Replace Amendment” as proposed by the administration (A10530) which sailed through the committee 24 to 0. Also without trouble were Amendments 10587, which requires an Annual Report on the program to the General Assembly; 10575, which clarifies “training” so as to disallow employers from taking “immediate advantage” of the worker without providing training; and 10572 which makes the program voluntary for the claimant. Amendment 10577 which allows claimants to leave a training program without losing their unemployment benefits also passed, but was questioned by Representative Brendan Boyle who was concerned as to whether this hurts the businesses who accept trainees who eventually quit. After the committee decided that this amendment would not jeopardize businesses, the amendment passed.

Other amendments, most proposed by minority Chairman William Keller, were not as successful. Seven were withdrawn for further consideration and work, while three failed outright. Among those withdrawn with the intent to retry on the floor were amendments to disallow businesses that had a history of tax delinquency (A10589), capping administrative costs at 3 percent (A10585), requiring businesses to register under CareerLink (A10576) and a clarification of employers’ intent to hire their trainees (A10574). A fleeting moment of bipartisanship occurred on A10588 when Chairman Ron Miller explained that he opposed the amendment, “If it shows success, I don’t want to limit it to 500,” and Chairman Keller wholeheartedly agreed.

Onto the failures! Three amendments were voted down, all on party lines. A10611 proposed limiting the participation of businesses that had not hired trainees in the past and Republicans agreed with Chairman Miller that such regulations border on mandating the business to hire every trainee. Although the Georgia Works program offers a stipend of $240 per week for its participants, there will be no stipend in Pennsylvania. Representative Scott Perry was unconvinced with Chairman Keller’s argument that the stipend would pay for transportation on top of the unemployment benefits the worker would already be receiving, and his Republican colleagues agreed. Finally, in a debate over confusing language and questions over funding, A10586 proposing to cover workers compensation in the program, failed.

Throughout the hearing we heard the committee repeat “high-priority jobs,” and finally Chairman Miller explained that such occupations were classified by the state for the following reasons: jobs that are in demand by employers, those with higher skill needs and those that are likely to provide family-sustaining wages.

Keystone Works I Program Act was voted out of committee unanimously as amended today.