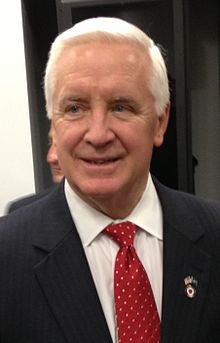 Gone are the doom-and-gloom predictions (save for public pensions, but we will get to that later) and programmatic cuts that were the hallmarks of previous budgets.  Instead, the governor announced increases in spending for public education, programs to combat domestic violence, maintenance of state parks and forests, and higher education grants for college-bound kids who do not qualify for financial aid.

In a budget preview story published earlier this week, one pundit referred to the governor’s budget as a version of baseball’s “small ball”, where singles, stolen bases and bunts are used to manufacture runs.  While we would agree with that assessment, we would also say that the governor did lace a few doubles and triples into the outfield gaps.

In fact, some of our more seasoned Triad veterans are comparing it to the 4th budget of former Governor Bob Casey, although it is safe to assume we all hope the one that follows will not look like the 1991 budget.

Some of today’s highlights include:

As expected, the governor again called on the General Assembly to privatize liquor sales in the state, and briefly touched on his decision not to opt in to the Medicaid expansion under the Affordable Care Act, the latter causing protests in the Capitol rotunda during the address.

Finally, Corbett announced a proposed $300 million loosing of state and local pension contribution requirements for this year, but strongly urged House and Senate members to come to an agreement on public pension reform.

We have all of the relevant budget documents, from the text of the speech to the budget office analysis and everything in between. We will add to those documents as we get them.