In yet another example of President Trump doing exactly what he promised to do, the U.S. is now officially out of the Iran nuclear agreement, much to the shock of U.S. allies, who apparently didn’t watch him campaign at all.  The jury is out on what the effect of the U.S. withdrawal will be, but again, when someone shows you who they are, believe them the first time. 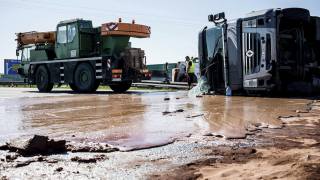 Trump also announced this week that the long-awaited summit between him and North Korean dictator Kim Jong Un will take place in Singapore on June 12.  There is no word yet on whether Rocket Man or the Dotard will also be in attendance.

North Korea this week also released three prisoners who they had held for more than a year.  Before we go too crazy about this transparent olive branch, lets keep in mind who illegally detained them in the first place.

Congress this week released more than 3,500 Facebook ads that were placed by Russian-linked groups during the 2016 elections.  It may shock you to learn that approximately none of them were, shall we say, “Hillary-friendly.”  We are sure that is just a coincidence.

Pittsburgh took its turn in the national spotlight Thursday as NBC Nightly News (hosted by the venerable Lester Holt) broadcast live from the Steel City.  The city’s tech boom and affordable housing challenges were on the menu.  Lester even rode the Duquesne Incline! Check it out here!

With Pennsylvania’s Primary Election only days away, we have been treated to (or perhaps inundated with?) stories pondering whether this year will be less-than-kind to the GOP.  May 15 isn’t likely to tell us too much, dear readers, but y’all should probably vote anyway.  Voting, we have been told, is a constitutional obligation, in addition to being gluten-free!

The race for the GOP nomination for governor isn’t a done deal quite yet, according to a poll released this morning.  In fact, one in every five likely Republican voters haven’t even made up their minds yet, which means if you have your television on for more than 10 minutes this weekend, you are gonna be bombarded with ads. Maybe do some yard work and celebrate Mother’s Day instead.

Some Philadelphia elected officials are a bit cheesed off that the city was shut out of the first round of medical marijuana facility awards and are vowing to make amends.  They say, perhaps correctly, that the state’s largest city should enjoy some of the economic benefit of the new law.  Let’s not forget, however, that those awards are based upon merit, and not location, per se.

And should you be temped to believe that medical marijuana dispensaries and grower licenses don’t have much of an economic impact, we would direct you to this story showing that 150 separate legal complaints were filed by losing applicants the first time around. If these licenses weren’t valuable, that number would be closer to zero.

Philadelphia City Council this week spent some time pondering a tax increase request from Mayor Jim Kenney, who would like to earmark those funds for the city’s school district. Let’s just say there was a healthy amount of skepticism centered on a tax increase for a school district that is not projected to have a deficit for two more years. In Philly fiscal years, that’s almost a lifetime.

Governor Tom Wolf this week kicked off his newest effort at curbing gun violence with the creation of a $1.5 million grant program.  A modest amount, to be sure, but you have to start somewhere, a saying that the U.S. Congress has apparently never heard before when it comes to gun violence.

Wolf and U.S. Sen. Bob Casey Jr. this week denounced a recent request by the Trump administration to swipe about $7 billion that was earmarked for the CHIP program, which provides health insurance for about 180,000 Pennsylvania wee ones.  Trump says the cut, which is one among many, is needed to bring the federal budget closer to balance.  How the budget ever got out of balance is anyone’s guess.  Sorry, we have to refocus.  We just rolled our eyes really hard.

Pittsburgh City Council this week put the brakes on a plan to establish new oversight for the embattled Pittsburgh Water and Sewer Authority. Council members would still like a seat at that particular table, which makes a ton of sense considering that when stuff goes haywire (and it does), unhappy city residents aren’t calling the PUC.  They are calling their council member.

In our Shameless Client Plug this week, we congratulate our good friend Robert Bogle, president and CEO of the Philadelphia Tribune, for receiving an honorary degree from Temple University this week. That cherry and white looks good on you, Mr. Bogle!

In our We Can’t Make This Up section this week we take you to Poland, where a tanker truck full of chocolate crashed, spilling 12 tons of the sweet stuff all over the road.  This is one mess that your children would be happy to clean up, we are sure.

That’s what passes for news around here on a simply resplendent Friday afternoon!  Remember, Sunday is Mother’s Day and Tuesday is Election Day, so you have plenty to keep you occupied until we meet again.  From all your friends at Triad, have a great weekend!