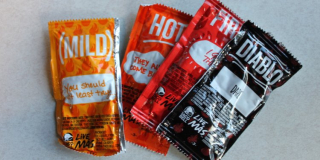 Also this week, the current occupant of the White House continued his unrelenting attack on John McCain, accusing him of sabotaging the Senate’s Repeal and Replace legislation, as well as attempting to sabotage the Trump campaign entirely. If this continues, we fully expect Meghan McCain to leave The View and run for president.

California Congressman Devin Nunes sued some Twitter parody accounts for $250 million, citing defamation of character. One of the targets of Nunes’ lawsuit, the Twitter account @DevinCow, now has double the followers of Nunes’ real account, likely because Nunes himself seems to not have a very good idea of what social media actually is and how it works.

Democratic presidential candidate Beto O’Rourke became the first in his party to stump in Pennsylvania, hanging out with a few thousand students at Penn State. This will not sit well with Joe Biden, who as we all know (and will be told 65,000 more times) is from Scranton. Get off his lawn, Beto!

The looming transit and transportation funding crisis has now caught the attention of the House and Senate Transportation chairs, Democrats and Republicans alike. The first step in solving a problem is admitting you have one, people. And whoa doggies, do we have one.

But hey, no worries! Shiny object over here! Hyperloop! This whole saga is reminding us of the monorail episode from the Simpsons. The Hyperloop is more of a Shelbyville idea.

Gov. Tom Wolf extended his opioid crisis disaster declaration for the sixth time in 15 months, saying that while it appears the state is making headway, there is much more to be done. Not sure anyone can quibble with that assessment, nor is there anything about the announcement we can make lighthearted fun of (like everything else we do around here), so we are just gonna leave that news here and move along.

The state’s Gaming Control Board announced that sports wagering was on the rise in Pennsylvania in February. We have a sneaking suspicion that some basketball tournament that is happening right now will boost March’s numbers even further.

One of the godfathers of legal medicinal marijuana is throwing a bucket of cold bong water on the idea of legalizing recreational pot, essentially saying we need to get the medical part right first. GOP state Sen. Mike Folmer will be one lawmaker who holds the keys to that particular kingdom as this debate heats up.

What would Pennsylvania’s energy landscape look like without Three Mile Island and the Beaver Valley nuclear plants? Well, that would be a complex question, learned this week. While electric rates may not rise dramatically in the short run, there will be a definite impact on Pennsylvania’s efforts to cut back on carbon emissions. This will be the conundrum that lawmakers of all political stripes will face.

And because it was forty years ago this week, let’s revisit that time TMI almost accidentally closed itself.

The PA State Lottery turns 47 years old this week, which once again allows us to renew our call to put Gus the Groundhog into permanent retirement. He can probably qualify for lottery-funded PACE benefits at this point.

Senate GOP leaders have jumped into the ongoing UPMC/Highmark fight, specifically coming after Attorney General Josh Shapiro for his lawsuit against UPMC. The Upper Chamber’s leaders argued in court this week that if there is any fancy health care legislating to be done, they will do it, not Shapiro.

From our “walking the talk” file, we bring you House Democratic Whip Jordan Harris and Caucus Secretary Joanna McClinton, each of whom logged a shift in the Capitol cafeteria on Thursday to highlight the need to raise the state’s minimum wage. Nothing like that mile-long walk in someone else’s shoes!

A bill that would establish nurse-to-patient staffing ratios resurfaced this week, reminding us all once again that it is bad business to have dead-tired, overworked nurses sticking any sort of needle into you.  Someday, there will be a compromise on this perennial piece of legislation, probably right about the time a hospitalized lawmaker ends up getting 50 ccs of something they weren’t supposed to get.

In Our We Can’t Make This Up feature, we take you to Oregon, where a man and his dog survived being trapped by snow in their vehicle for five days by eating hot sauce packets from Taco Bell. After five days, we suspect that the interior of that car smelled… interesting.

That’s what passes for news around here as spring has sprung and Mother Nature apparently didn’t notice. We will be back next week to bring you all the news we care about! Until then, from all your friends at Triad, have a great weekend!