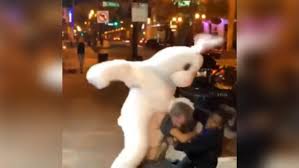 The U.S. economy grew by 3.2 percent in the first quarter of the year, shattering expectations and putting to rest fears of a slowdown. Both the Washington Post and the New York Times trumpeted the news this morning, while Fox News announced the growth number as a measly 3.1 percent, proving once again that Fox News is biased against President Trump.

Thursday was the start of Joe-mentum time, as former Vice President Joe Biden made it official that he is running for president. The news spawned dozens of stories about Joe being “the most electable,” so it is probably a good time to remind everyone that over the past three presidential campaigns, the national popular vote was won by an African-American male, an African-American male, and a white woman, respectively.

House Speaker Nancy Pelosi this week pumped the brakes on all the talk of impeaching President Trump in the wake of the Mueller report release, preferring instead to hold some hearings and see what’s what. Once again, we remind our dear readers that the speaker prefers chess to checkers.

Pennsylvania was awash in good news this week, with by far the most important event of the year occurring on Wednesday. At long last, the Eastern Hellbender is now the official amphibian of the Commonwealth. Lay down your arms, people.

The Pennsylvania economy is also rolling right along, as the Commonwealth’s unemployment rate dropped to 3.9 percent, the lowest on record. If you think those numbers won’t matter as we careen towards the next presidential election, you might be in for a shock in November of 2020.

As central Pennsylvania celebrates the start of Beer Week, we thought it would be a good idea to point out that Pennsylvania is now the top craft beer-brewing state in the country, pumping out 3.7 million barrels of beer every year. Cheers to all the Pennsylvania brewers out there.  You done good.

The mayor of Harrisburg this week called on the state to take over the city’s beleaguered school district as the state yanked $10 million away from the district for not cooperating with an audit. No word yet from the Department of Education on whether they are ready to give themselves that kind of unending migraine.

A new law took effect this week that will end the practice of the state confiscating your drivers license for non-traffic-related crimes. For a while there, we were a little out-of-control with the whole “we will take your license!” thing. Somebody has to pay gas taxes around here.

Pennsylvania fishing license applications have hit a 50-year low in Pennsylvania. Here’s an idea: put down the iPhones, take your kids’ Xbox controllers and go find a nice, quiet stream.

A change in the way Pennsylvania collects sales tax for online purchases is on track to net the state a cool $300 million this year, far and away more than the estimated $50 million that was expected. The news just might make June a bit easier around these parts.

New York City is considering banning processed meats in its latest bout of insanity, although we are eager to see the reaction of Bronx Zoo denizens at Yankee Stadium when they are informed that hot dogs are now verboten.  Meanwhile, at PNC Park in Pittsburgh, you can get a kielbasa sandwich topped with pierogis.

Attorney General Josh Shapiro won his latest bout with UPMC over his actions to prevent the health care giant’s consent decree with Highmark from expiring.  A federal judge threw out a UPMC suit this week, and the whole issue is likely to land in the Pennsylvania Supreme Court very soon. In the words of Joe Biden, this is a “big fu***ng deal.”

During debate on a bill to establish mandatory work breaks for nurses, a Washington state senator this week said that she is quite sure that nurses sit around and play cards during the day, prompting over 1,700 nurses to mail her decks of cards.  Here’s to hoping one of those decks conked her upside her silly noggin.

We have four, count ‘em, FOUR Shameless Client Plugs this week.  So without further ado, we bring you #1.  Congratulations to our friends at Immaculata University for breaking ground on their new athletic track, with a little funding help from the Commonwealth!

SCP #2 takes us to Philly, where nobody does a science festival like our good friends at The Franklin Institute!

We stay in Philly for SCP #3, where we bring you this piece about the work that our friends at the World Affairs Council have been doing since 1949.  In a democracy, agreement is not essential; participation is.

And for our final SCP, Gov. Tom Wolf joined our good friends at Johnson Controls to open a new vocational lab in north Philly, designed to help folks train for the green jobs of the future!  Thank you, governor!

In our We Can’t Make This Up segment this week, we take you to Orlando, where a man wearing an Easter Bunny outfit got into a brawl in the middle of a city sidewalk. The bunny was attempting to break up a fight, and quickly began firing off rabbit punches, making him an Instagram legend. You keep doing you, Florida!

If you have a moment this week, help us welcome our newest employee, Jan Webb, who joined our funhouse on Monday of this week. Welcome, Jan!

That’s what passes for news around here as we wait for the General Assembly to assemble once again next week.  Until then, from all your friends at Triad, have a great weekend!

Always a great read. Keep up the good work.