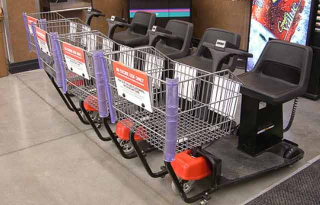 It was a bad week for agent provocateurs this week, to say the very least. First, Wikileaks founder Julian Assange was pulled from his Ecuadorian Embassy rabbit hole in Great Britain and thrown in jail, where he now awaits extradition to the U.S. Also, Assange appears to have aged roughly 70 years in the past 18 months.

And let us not forget the self-proclaimed “Trump’s Greatest Threat,” lawyer Michael Avenatti, who found himself staring down the barrel of a 36-count indictment that could land him in the pokey for the next three centuries. It is tough to run for president from prison, as we all know.

Soon-to-be Cal Tech Assistant Professor Katie Bouman made international headlines as her algorithm provided our first-ever picture of a black hole. Thank you, Professor Bouman, for scrambling our brain and forcing us to ponder the nature of the universe for much longer than we had intended when we woke up Wednesday morning. And for getting “Black Hole Sun” by Soundgarden stuck in our heads all day.

State lawmakers held a rare joint session of the House and Senate to honor the victims of the Tree of Life Synagogue massacre in Pittsburgh. The last time the General Assembly convened such a session was shortly after 9/11. For at least one day last week, we were all #StrongerThanHate.

We pause for a moment to bring you this truly bizarre story of a Pennsylvania woman who had four bees living in her eye, drinking from her tear ducts. Between deer ticks, cicadas and stink bugs, it looks like insects in Pennsylvania are plotting a coup.

The ink was barely dry on the City of Pittsburgh’s shiny new gun-control ordinances when Mayor Bill Peduto was slapped with a bevy of lawsuits by Second Amendment supporters. Peduto remains defiant, even as one member of the General Assembly called for his impeachment, a move that would result in Council President Bruce Kraus (who voted for the ordinances) becoming mayor. Which we would presume cause another impeachment, which would elevate… you get the idea.

A controversial new bill aimed at saving the state’s nuclear power plants got its first public hearing this week, and lawmakers wasted no time digging themselves firmly into position on both sides of the issue.  As this plan moves down the legislative tracks, expect a ton of heat and very little light to be shed, right up until that moment when a game-changing (or more aptly, a vote-changing) move is made.

And what would that game-changer be, you ask? Well, inquisitive readers, it very well could be the entrance of the Green Dog Caucus (their name, not ours), a group of environmentally-conscious lawmakers who could very well hold the keys to the kingdom. If those folks decide to throw some votes into the final tally, 102 and 26 seems within reach.

Over in the state Senate, a new effort was launched to change the way congressional maps are drawn. Within moments, the perfect became the enemy of the good, as groups who supported last year’s bill walked away, citing changes that were made to garner more support, ironically. It is gonna take a whole lot to work to get this porridge just right.

If you were on the Hill this week (you likely saw us), you may have noticed a few hundred nurses milling around advocating for increasing support for home-based care for seniors and the disabled. As Pennsylvania strives to re-balance its long-term care system, these nurses are at the tip of the spear. So yeah, let’s dig a little deeper, shall we?

The first day of deer hunting season is, as we all know, a sacred holiday in Pennsylvania. Next year, we will get to celebrate a little earlier than usual, as the opening of rifle season moves to the Saturday after Thanksgiving. The downside is, of course, that we now will have to endure three extra days of people complaining to the Game Commission that there are “not enough deer.”

Despite the fact that there are roughly six hundred Democrats running for president in 2020, it looks like the deal might be wrapped up long before Pennsylvania’s voters schlep to the polls. States across the country are furiously jockeying to get to the front of the line, so much so that we fully expect New Hampshire to just move its primary election date to late 2019.

And when those voters go to the polls, they are likely gonna be in a pretty foul mood, we learned this week. A recent Pew research poll found that a majority of Americans believe the country is on a bullet train to hell on everything from foreign policy to race relations to the economy. Man, lighten up people. Imagine if we were in a recession.

If you want to know all about who is funding the race for mayor in Philadelphia, feel free to check out this piece. Spoiler alert: whoever you guessed is funding the campaigns probably is.

We send a special shout-out to friend and former client Brandon Flood, who this week took over as secretary of the state Board of Pardons. All the best, Brandon!

With sadness we note the passing of former state Rep. Eugene “Snuffy” Smith. For those familiar with Pennsylvania politics, Smith’s son Sam also served in the General Assembly, eventually becoming speaker of the House. Our deepest condolences go out to the Smith family.

In our We Can’t Make This Up segment this week, we take you to Tennessee, where a woman borrowed (OK, stole) a Walmart motorized scooter and drove it on down the highway to grab a cup of Joe at the local Waffle House. Walmart, scooters and Waffle House: ‘Merica, baby.

That’s what passes for news around here as we drive off into the weekend here at Triad World Headquarters. Come on back and hang with us next week as the General Assembly assembles again on the banks of the mighty Susquehanna. From all your friends at Triad, have a great weekend!