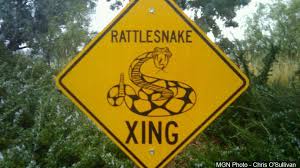 Note to President Donald Trump: when you find yourself in a bit of a bind, DO NOT send Rudy Giuliani on television to clean it up. Unless by “clean it up” you really mean “dump gasoline all over it, set it on fire and throw it in a dumpster.”

From Hong Kong to Berlin, from Dublin to New York and beyond, millions of earthlings are participating in a worldwide climate strike today to raise awareness of climate change. Suffice to say this issue has now gone from policy discussion to movement.

Today, will mark the final day of power generation at storied Three Mile Island, as natural gas and a volatile energy market finally achieved what anti-nuke protesters could not over the past forty years.  As the final droplets of steam evaporate at the giant cooling towers, so goes the carbon-free power that lit up over 800,000 Pennsylvania households since 1974.

A report was released this week showing Pennsylvania college students are currently lugging around the 2nd-highest average student debt load in the nation.  #WeAre #NotDoingSomethingRight.

This week in Rather Astounding Statistics, we bring you the unbelievable 12%: the number of Pennsylvanians who currently do not have enough food to eat.  Seeing as how we are in the longest economic expansion in the nation’s history, that number seems jaw-dropping to us. If you read that number and thought “we should definitely cut SNAP benefits”, you are misreading this entire paragraph. Start over.

Speaking of stats, since the enactment of the Affordable Care Act, Pennsylvania’s uninsured population has shrunk by 5%, holding steady at around 6%.  If you read that number and thought “we should definitely blow up the system and start over”, see the preceding paragraph.

Bernie Sanders and Joe Biden got a bit feisty with each other in Philly this week, battling over who is a bigger friend of organized labor.  It was sort of an “I know you are, but what am I?” moment between septuagenarians.  It ended with Biden telling Bernie his dad could definitely beat up Bernie’s dad.

Environmental groups are all kinds of salty that, in their judgment, the Wolf Administration is not using the proceeds from the nationwide Volkswagen settlement to push electric vehicles more aggressively.  Considering the fact that only 10% of the entire fund has been awarded, maybe we all need to pump the brakes, so to speak, on the criticism.

Next week, both the House and Senate will start hearings on what should be done to curtail gun violence.  It is against that backdrop that a bipartisan group of lawmakers held a press conference this week to push for a Red Flag Law in Pennsylvania to help curtail gun-related suicides. Seems reasonable, which means its likely to be mired in arguments about completely unrelated issues for the foreseeable future.

Our friends at APSCUF this week announced an agreement on a four-year contract with the State System of Higher Education, thereby freeing the faculty up to keep educating the next generation of amazing Pennsylvania graduates.  Judging by the ages of many of the Climate Strikers today, reversing climate change looks to be Job One for them.

We also send a shout-out this week to our friends at Aqua PA for consummating a rather sizable merger with the Delaware County Regional Water Quality Control Authority. Nicely done!

Readers of Pennlive.com and political nerds everywhere are in for a treat, as the venerable John Baer announced this week that he is joining the Pennlive stable of top-notch journalists. Congratulations John, you may now resume beating elected officials about the head and shoulders.

In our We Can’t Make This Up segment this week we take you to Oklahoma, where the wind comes sweepin’ down the plain.  Local officials in Guthrie this week stopped a man and woman for driving a stolen car and also found a rattlesnake, a canister of Uranium, an open bottle of whiskey and a handgun, which coincidentally is also a lyric from a Warren Zevon song. Send lawyers, guns, whiskey, uranium, a snake and money, the shit has hit the fan.

That’s what passes for news around there on a simply resplendent Friday in the heart of your state government.  Come back and join us next week!  You bring the rattlesnake; we will bring the whiskey! From all your friends at Triad, have a great weekend.